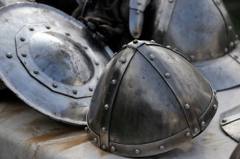 Grimoald took off his helmet as he crossed the threshold of the candle-lit shrine of St. Lambert.  The young knight’s long, dark hair was matted and the dust of a hard ride covered his face.  He crossed himself, his movements constricted by the armored plates strapped to his arms, legs and chest and made his way to the altar.  There, he knelt, placed his helmet on the floor and drew his sword.  He held it aloft, kissed its blade and laid it before the altar with reverence, matching its placement to the arms of the cross.  Next, he prostrated himself before the altar, spreading his armored limbs so that they too matched the arms of the cross.  He began to pray.

“Veni Creator Spiritus, Mentes tuorum visita.”  Grimoald had ridden all night in hopes of receiving his father’s last blessing, only to find that he had arrived too late.  Pippin II had succumbed to dropsy just hours before Grimoald’s arrival.  Distraught, Grimoald had chosen to find solace in the chapel of his mentor, the murdered Saint Lambert, where he would pray for the soul of his father.

“Imple superna grati quae tu creasti pectora. Amen.”  It had been three years since the good saint had given Grimoald the gift of the Holy Ghost on the day he became a knight.  Following three days and nights of fasting and prayer, Lambert had touched Grimoald’s forehead with the palm of his hand and opened him to the light of God. From that day forward, his sword belonged to the Almighty.  He lay prostrate before Him now, in complete subjugation. He intended to remain prostrate all day.

He first dedicated his vigil to honor his mentor, the saint.  His prayers begged St. Lambert to intercede on behalf of his father.  But he also asked the saint to seek the Lord’s blessing and guidance for himself, because he, Grimoald, was about to become the most powerful man on the continent.

Dukes of every region swore allegiance to the king, but ultimately served his “mayors of the palace.”   These were the King’s premier military and government leaders.  As mayor of Austrasia, Grimoald’s father, Pippin of Herstal, had become the most powerful mayor of all time.  He had subdued neighboring Neustria and lorded over the two largest regions of the kingdom. A powerful warrior and statesmen, Pippin had laid the foundation for combining the commerce of the Neustrians with the grain and landed wealth of the Austrasians.  He next aligned their military might into one fighting force.  Together, they were now financially and militarily the strongest force on the continent.

As the eldest of Pippin’s sons, Grimoald was next in line.  “…in saeculorum saecula. Amen.”

News of his father’s death was something that Grimoald had feared all his life. But his father had schooled him against grief.  Becoming Mayor was a moment for which one had best be prepared.  And Grimoald was. He had known for many years what he wished to do as Mayor.  He would become a warrior priest.  He would dispel paganism and bring glory to God and the Merovingian Kings.   And the Church, he believed, was the key to success.

The Roman Empire had failed because it had no higher calling.  The rule of law had been based solely on the might of those enforcing it.  And when the empire no longer had the might to enforce its rule from Rome, power had shifted to the landed estates and the empire cracked like ice covering the Seine. The vestiges of the empire remained in the houses ruling Gaul, but those who ruled were nothing more than warlords.  Each served his individual interests under the king.  Each served for the sake of power and succession alone.  This doomed them all to constant war and bloodshed.

Grimoald regretted not having seen his father before he passed from this world.  He had loved and feared the man. Yet, his father had also been weak in many ways.  Grimoald had detested that Pippin consorted with a woman out of wedlock and fathered a bastard, an arrogant ruffian named Charles.  There was even talk that the woman’s family had murdered Saint Lambert when the holy man had criticized his father’s affair as “an affront to God.”

A priest and his acolyte genuflected near the altar. From his prone position, Grimoald could only see the hems of their robes as they straightened to approach the altar.  He heard the priest place the chalice on the altar and begin to pray aloud.

Grimoald and the acolyte answered, taking up the familiar response.  “Ad Deum qui laetificat iuventutem meam.” Grimoald felt his body relax.  He closed his eyes and pressed his forehead against the cool stone of the floor.

He did not hear the knife being drawn from its scabbard.  Grimoald only heard his voice joining that of the priest praying in the language of God’s holy mass.  “Qui fecit caelum et terram.”

Likewise, he did not hear, but rather felt the impact of the dagger as it was thrust under his ribs.  An explosion of air escaped his lungs through the newfound rent in his body.  Before he could move, the attacker knelt on his back and the knife struck again.  This time it sliced across the soft tissue at his throat, ensuring that Grimoald would remain prostrate throughout the day.

Grimoald’s murder sparked the civil war that marks the rise of the Carolingian Kings.  His mother, Plectrude, imprisoned the bastard Charles and named her eight-year old grandson Theudoald as Mayor.  Theudoald lasted a year.  Charles escaped, seized his father’s treasure and declared himself, mayor.  He spent the next ten years battling his father’s wife, allies and enemies, until the Neustrian opposition was broken.

The ensuing 17 years were no less violent as Charles brought to heel every region of the Frankish Kingdom.  He shed the blood of the Alemans, the Burgunidans, the Saxons, the Sweves, the Bavarians and the Gascons of Aquitaine.  Charles is most famous for stopping the “Saracen” invasion at Poitiers in 732.  Since the Saracen were followers of Muhammad, historians have credited Charles with saving Christianity in the Western world from the Islamic expansion that had swept much of the Mediterranean and the African continent. It was at Poitiers that Charles earned his nickname “Martel” or “the Hammer.”

Although an additional three Merovingian Kings were elevated during the reign of Charles Martel, only one held any real power.  The rest were considered “rois féants,”or “puppet kings.”  When the last of these, Theudoald IV, died in 737, Charles did not bother to elevate another.  At Charles’s death in 741, he ruled alone as mayor of the palace.  For four years, the Merovingian Kings had been relegated to being little more than a memory.  Charles lay claim to the allegiance of all the noble families from the Rhine to the Pyrenees and planned to leave the kingdom in the hands of his three sons, Carloman, Pippin III (the Younger) and Gripho.