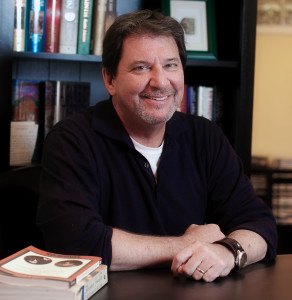 His first novel ANVIL OF GOD, Book One of the Carolingian Chronicles received a starred review from Publishers Weekly, was named Historical Fiction Book of the Year by the Independent Publishers Awards and Mainstream/Literary e-Book of the Year by Writers Digest Magazine. He is currently writing his second novel about Ben Franklin’s ill-spent youth called Sin of Omission.

With an AB in history from Dartmouth College, Gleason brings a strong understanding of the events that shaped history. He says he writes historical fiction to discover “why.” He is married, lives in Virginia and has three sons, one daughter-in-law and a beautiful granddaughter.

Find the author on GoodReads

J. Boyce Gleason Talks about the Success of his iUniverse book “Anvil of God” — Presented by LifeRich Publishing

An Interview with J. Boyce Gleason, author of Anvil of God

An interview by Sabrina at DigitalPubbing.com

S.R.: When did you start writing?

J.B.G.: I always have had a great fear of writing.  I even chose my courses in college based on how many and how short the term papers were (hard to do for a history major).

After I graduated, I wanted to work on Capitol Hill and spent over a year trying to find my way in.  When at last I was offered a job, however, it was as a press secretary.  I almost didn’t take the offer because of the amount of writing it required.

When I sat down to write my first op/ed column for the congressman, however, it seemed to pour onto the page.  I finished it in little over an hour.  I sat back, startled.  How could this be?  It was too easy.  That’s when I first suspected that there was something more between the written word and me.  It took another twenty years before I sat down in earnest to write my first novel.

S.R.: You have a history degree from Dartmouth. How has your passion for history shaped your writing and the themes and events you choose to write about?

J.B.G.: I was very lucky to have the opportunity to study under some of the foremost historians in the world.  They had an amazing ability to make history come alive and more importantly to relate it to who we are and how we live today.

In particular, I have always had a fascination with European history as, in many ways, it shapes our culture, our laws, our religious beliefs, our mores, and our economy.  How can we know who we are if we don’t know from where we come?

S.R.: In your author bio on your website, it says you write “historical-fiction to discover why.” Can you please elaborate?

J.B.G.: I once saw an interview with John-John Kennedy where he was asked, “what was it like growing up in Camelot?”  You could see the look of frustration in his eyes at the question.  He said, “to you it was ‘Camelot,’ to you my parents were ‘Jack Kennedy’ and ‘Jackie-O.’ To me they were just ‘mom and dad.’”

It brought home the fact that all the names that people history were just that – people.  They had hopes and dreams and fears and prejudices.  They had childhoods that shaped them and trauma that wounded them.

To make history come alive, you have to see beyond the names and dates and into the minds of the people who shape the story of our past.  Why did they do what they did?  What were they thinking/feeling/anticipating/fearing?

To write historical fiction, you have to become an expert authority on the principle characters of your story.  You have to understand their motives and desires at a very intimate level.  You have to watch them interact with each other, watch them make choices that ultimately lead to historic events.

In so doing, you learn why history happened the way it did.  If you get the characters right, the words fly onto the page.  If you get it wrong, they start changing the story – pushing the history in a new direction – and you know you have more work to do to find their real motives to get the story back on track.

S.R.: Your book, Anvil of God, is based on a true story. What drew you to write about Charles the Hammer and his family?

J.B.G.: In college, I had the opportunity to study under a great professor named Charles Wood.  The students used to call him “Chuckling Charlie Wood” because he had a deep belly laugh and a warm personality.

He had us study Charlemagne and we read an epic poem called “The Song of Roland.”  It was like Homer’s Iliad and I was surprised that I had never heard of it.  After reading it, I couldn’t believe that it wasn’t the basis of a novel or a movie.  I decided then that if I ever wrote a novel, it would be about “Roland.”

Years later, when I sat down to write, I looked for a starting place to begin the story.  I couldn’t find one.  I kept searching backward in time to find the right story, the right character to engage the reader and frame the story.  Was it Charlemagne as a young man?  His father?  His grandfather?

I finally stumbled across a reference to what historians called “the scandal of the eighth century.”  The daughter of Charles the Hammer (Charlemagne’s grandfather) left her father’s court in the dead of night to pursue a love amongst his enemies.  How could that happen?  I wondered.  And I was hooked.

I started writing the next day.

S.R.: What do you want readers to take away from your book?

J.B.G.: I want them to walk away thinking, “What a great story!” And, “I can’t wait to see what happens next.” And so far, that’s pretty much what I get from people who have read the book. They want to know, “When can I get book II?”

Anvil of God is the story of a family in crisis. The choices they are given and the decisions they make shape the world they live in. And by reading their story, you learn quite a bit about life in the Dark Ages and more importantly, how it shapes our world today.

S.R.: What are you working on next?

J.B.G.: I am about halfway through Wheel of the Fates (Book II of the Carolingian Chronicles).  It picks up the story about two months after Anvil ends and brings back most of the major characters.

I’m also working on a novel about a young Ben Franklin called Sin of Omission.

This interview was conducted by Sabrina at DigitalPubbing.com