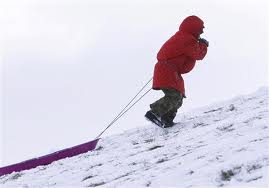 THIS is the kind of snow we dreamed of – eighteen inches of powder topped by a freezing rain that glazed the surface with a shimmering crust of ice.  My brothers and I would stomp into our rubber boots, put on our coats and mittens and hats and head outside.

We had a golf course behind our house (before anyone thought this could become a fashionable housing trend) with a mile-long hill to climb from our home up to the clubhouse.  We weren’t members of course, but come winter, the course was ours.  We’d grab our sleds – the red-sheet-of-plastic kind that curled up in the front and a bit on the sides – and trudged up the hill.

When I was little, I was light enough to walk on top of the glaze, but for the most part, I had to crunch through it, down to the snow below, in order to make my way.  If the snow was deep, this proved to be a real challenge as the snow might be deeper than my legs were long.

At the top of the eighteenth tee box we would turn to face the course.  We had a mile-long expanse of wide open snow before us that was perhaps a half-mile wide.  Every sand trap, tree and fence was a death trap, every tee box a launch pad.

And we could fly.  Our parents had no idea of the risk we were taking (neither did we).  Think of the luge – or more accurately the skeleton – and you get the picture; five to ten-year-olds lying face down on a sheet of plastic, skimming over a sheet of ice down a mile-long hill at full-tilt boogie.  It was glorious.

We steered with our rubber-tipped boots and our wool mittens, lightly tapping the ice to maneuver clear of the course obstacles.  If you used too much pressure, you’d spin like a top or worse, start flipping your way down the hill.  This rarely happened as we were experts, much the way my cousin Rob who lives near the water was expert at sailing and timing waves and bodysurfing.

One winter he came to visit and we, of course, took him sledding.  He was older, so we assumed he knew what he was doing.  He complained during the long walk up the hill and we assured him it was worth the effort.  Fearless, we launched off the eighteenth tee box, my brothers first, Rob next and I last. 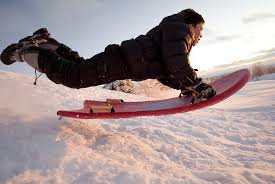 Shouting, Rob veered wildly to the right.   I followed, more out of  curiosity than anything else.  I thought he had discovered a new path to try.  He was still shouting and I realized he couldn’t steer.  He was also heading right toward the sixteenth tee box.  Behind it was a line of trees, a chain-link fence and a gazebo-like structure the golfers used when it rained.  The tee would launch him into one of the three obstacles.

I plotted a course to catch him heading straight down hill to pick up some speed and then swerved to the right so I could slide up behind him.   We were almost to the tee box when I grabbed his sled with my left hand, slammed my right foot and hand into the snow and we veered right towards the chain link fence.  We approached it vertically so that it paralleled our path down the hill.  At the last moment, I shoved Rob away and we passed by it, I on one side of the fence, he on the other.  As he passed the last section, he bounced against the fence, hurtling suddenly left.

He was cursing now but we were out of harm’s way. I slipped wide right to avoid the gazebo and arced slowly back to follow him down the hill.  We ended the run over a hundred yards from my two older brothers.  Rob’s winter coat was torn –snagged on the chain-link fence.

He was furious.  “Why didn’t you tell me how to steer?”  He started cursing.  And although I was intimidated, I remember taking umbrage (I didn’t know what that word meant at the time – but it’s how I felt). I had just saved his ass (I didn’t know that word either – but, you get the picture). We caught up with my two older brothers and in the way of children everywhere, they simply shrugged and started back up the hill.

I tried to relive the experience years later when I was a teenager.  I took the red sled up the mile-long trek to the eighteenth tee.  The course spread out below me just as I had remembered.  And with a thrill I leapt off the hill onto the snow below, my sled beneath me.

I nearly passed out from the pain.  I hadn’t realized that, with puberty, my body reacted differently to blows below the waist.  I also was too heavy to glide over the icy crust and plowed deep into the snow, getting a face full of the crunchy surface as it crested over the lip of my sled.  After several attempts, I gave up and walked back down the hill to our house.

Some things, I suppose, are best left to children.