Jeff Lustig was six feet tall in sixth grade.  He towered over the rest of us – all 110 pounds of him.  He had long arms and long legs.  None of us, however, thought too much about this height disparity as we were all going through changes at the time – especially the girls – and, they were far more interesting.

The only time it became an issue was during gym class.  Each day, we’d be sent out to run around Todd field – where the high school varsity played football on Saturdays – and Jeff would race ahead, stretching his long legs in wide leaps that took him flying around the field.  He always came in first, by a lot…maybe forty or fifty yards a lot.

For those of us who considered ourselves athletes, this was quite humbling.  For me, it was the most frustrating part of gym.  In all other endeavors, I was quite good.  Climbing ropes, dodge ball, kickball, trampoline, balance beam and tumbling.  I just couldn’t compete when it came to running.  For some reason I always came in third to last.  It wasn’t that I didn’t try.  My trying got me third to last.

What worried me was that elementary school ended after sixth grade and we would be sent to middle school the next year.  The run there was much longer – two football fields, side by each – it would double what I suffered through at Todd field.  And, since our middle school was in a building adjacent to the high school, all the varsity and JV coaches would see my pathetic run. I went away for the summer as despondent as a sixth grader (going into seventh!) could be. 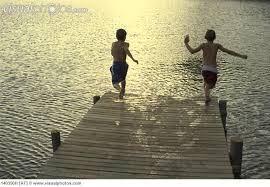 My parents had bought a small lake house on a quiet lake in the middle of the woods, far from civilization.  The lake had a one-lane road that ran around it.  The kind where everyone you pass by waves to you.  It was about ten degrees cooler at the lake most days and we spent just about all of them in the water.  We took swimming lessons every day for about two hours led by a sadistic Vanderbilt football coach who liked terrorizing young people during the summer.

Speaking of terror, the entire summer I was also in close proximity of my two older brothers, Jimmy and John.  Jimmy was going to be a sophomore in high school (John, a freshman) that year, and he wanted to try out for the varsity football team.  The coach had given him a workout schedule with the admonition that if he wanted to make the team, he’d better show up in shape.

So, every morning he would wake up, shove John and I out of bed and take us out for the morning run. They would head out on a mile run up the one lane road and I wouldn’t see them after we left the driveway.  I’d plod along until I got to the Hugh’s house (one mile away) and we would commence doing sprints: ten fifties, ten hundreds, and then ten backward twenties and a few hopping and skipping drills.  These complete, they would turn and run back to the house while I plodded along by myself until I reached home. The best part of the workout? Running down the driveway, past the house, down the stone walk, past the patio onto the dock and off its end, into the lake where the water would cool us off.

Jim’s afternoon workout involved lifting weights and here too I was drafted to be part of his workout crew.  We’d go to the clubhouse where the Vanderbilt coach had a set of weights and I would wait until all the older boys were done so that I could strip off the big disks for the smaller ones.  Then I, and my spindly arms, would strain and groan my way through three sets of eight, often to the taunts of the older boys, who thought I looked funny.  (I’m pretty sure I did at this point in my life).

Other than that, it was a great summer.  We sailed on sailboats, went to Friday night dances and I even got to walk Laurie Hughs home one night (although I totally muffed the hand-holding part – she went to the next dance with Bob Osterhouse).

With summer’s end, we returned to Briarcliff Manor.  I started seventh grade in a building next to the high school.  It looked like a large version of the Alamo, a Spanish fort stuck in a New York suburb.  It was ancient and massive with plaster on the walls and a giant lunchroom with a huge mural of a Mexican Cantina (that would be considered very politically incorrect and whitewashed just a few years later).   I navigated the halls, met my new teachers and at seventh period, headed downstairs to the locker room for gym class.

The lockers were ancient and smelly and intimidating.  And then there were the communal showers.  We looked at each other with wide-eyes.  Could we shower with our gym clothes on?  Coach Hoffman introduced himself (I already knew he was the high school varsity coach).  He handed us the requisite gym shirt and shorts and told us to suit up and meet him outside in five minutes.

Sure enough, we went outside and there were the two football fields, side by each, waiting for us.  It was hot and the fields were dusty and I was not happy.

“Two times around,” he called.

“Oh, my God,” someone whispered.

The whistle blew and I took off running along the white line that defined the right side of the field.  I got about seventy yards down the sideline when realized I was alone.  I stopped and turned around to see what the problem was.  I looked back and there were my classmates about thirty yards behind.  Coach Hoffman was waving me on.

So I did.  The longer I ran the farther ahead I got.  On the second lap, I began passing kids in the back.  Only Jeff Lustig was anywhere near me and he was twenty or thirty years behind.  And I wasn’t even getting tired.  I got to the finish line and stopped in front of a smiling Coach Hoffman.

Jeff Lustig ran up to me, sweat running down his face, his eyes wide and disturbed.  He grabbed me by the shoulders and shouted, “What happened to you?  What HAPPENED to you?!

I shrugged and said, “I had a good summer.”