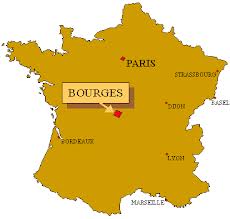 My brother Goose and I went to France together on a Dartmouth study abroad program.  As anyone who knows us would attest, this had to be a mistake on Dartmouth’s part.  We each stayed with families in what, at the time, was a blue-collar town in central France called Bourges (it is now a spectacularly restored medieval city and very much a prime tourist destination).  If you look at a map of France and point to its exact center, your finger will be on the dot labeled “Bourges.”

While there are many stories about our journey there, this story is about a soccer match between the Americans studying abroad and the Bourges soccer team, L’équipe Bourges.

Unlike today, few Americans then played soccer.  It was a nascent sport in America.  My high school had added a soccer program only three years earlier and I don’t think we were the exception.  The French, on the other hand, play soccer from the time they are toddlers so, from a skill set, we were in for a tough day.

Adding to that stark reality, was the fact that anti-American sentiment was high during those days, so instead of fielding their third or fourth team for the match – which would have been appropriate given our skill set – L’équipe Bourges played their first team – to further our education about modern French culture. Apparently, this had become an annual rite in Bourges for some time and come game day several hundred Bourges locals showed up for the match.

That is not to say that we were without resources.  We were blessed to have three all-ivy caliber players from Dartmouth’s soccer team: Steve Alfred, Bruce Bokor and Charlie Krupanszky.  All three were at the peak of their game.  We also had an assortment of other Dartmouth athletes:  Brian Deevy, Bill Narin and I played rugby. Frank Wilson and my brother Goose played (American) football.  Others like Jamie Pfaff and had played high school ball.

Alf took charge, deploying us to different parts of the field.  Alf and Bruce played forward, Charlie center mid-field and the rugby and football players were assigned mostly to mid-field and defense.  Goose, who played offensive guard at Dartmouth, was to put in goal.  We had no idea about the rules or strategies, so Alf kept it simple.  “If they break through, kick the ball out of bounds.  Only Charlie, Bruce or I will throw it in, and other than that, keep your hands off the ball.”

From the opening whistle, it was clear we were outmatched.  Soccer is a team sport and they had skills at every position.  The game became a blur to me; the ball seemed to dance around the field, while I relentlessly chased.  Watching Alf and Charlie and Bruce, however, was worth the price of admission.  Even the French crowd gasped at some of their moves and grudgingly gave them a round of applause.  They were so fast and the ball seemed to float about their feet like it was attached.

As the game unfolded, it was apparent that we would play most of the game on our end of the field.  The crowd roared every time one of the French took a shot on goal.  And they were roaring a lot. 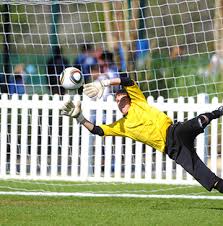 The funny thing is that they weren’t scoring.  Despite the fact that we shouldn’t be in the game, they couldn’t get the ball in the net.  This was not because they couldn’t shoot.  It was because of Goose.  He had no idea what he was doing, but there he was tapping the ball over the bar and catching shot after shot and returning the ball to our players.

Now as a younger brother, I have made a religion out of never talking up my older brother, so if I am putting accolades like this down on paper, it should tell you how good he was playing.  At half time the score was tied 0 – 0.

In the early stages of the second half Alf scored on a pass from Bruce and the crowd turned ugly.  This was supposed to be a lesson the French taught us, not the other way around.  L’équipe Bourges grew angry and the cheap shots began.  This however, had unintended consequences.  Football and rugby players are used to being hit, so little of what they dished out had any impact.  And the referees couldn’t look away indefinitely.  L’équipe Bourges received penalty after penalty and we began to play on their end of the field.  The crowd roared its disapproval and we Americans had the opportunity to learn a variety of new and inventive French idiomatic expressions.

Again, they pressed and again we retreated.  I kicked the ball out of bounds and Charlie pulled me aside to explain that it couldn’t be across the end line or the other team would get a corner kick.  They had three of these in a row and Goose knocked down one after another.

We learned on the field about penalty kicks and standing in a line, shoulder to shoulder, with your hands covering your testicles.  The French fired at will and still, Goose kept our lead intact, rebuffing shot after shot after shot.

And then the strangest thing happened.  The crowd started cheering for Goose.  They picked up his name and when he blocked a shot chanted, “Goose! Goose! Goose!”  It was like Rocky IV when the Russians started rooting for Rocky.  Only Rocky had yet to be made.

Charlie scored, pushing our lead to two and the time bled from the clock as Goose held the French scoreless.  The final whistle blew and it was over; against all odds, we had won.  Alf, Charlie and Bruce hugged Goose and begged him to try out for the soccer team.  “You have no idea what you just did,” Charlie said.  But, the French did and to a person they came to shake his hand.

Two years later, I went back to France to another small town and watched a similar game play out with a student named Nick Lowery, who would one day become a three-time all-pro field goal kicker for the Kansas City Chiefs.  But that is another story…