It was late.  The kids had all gone home and I was left with twenty plates of the famous Gleason Family Christmas Cookies, 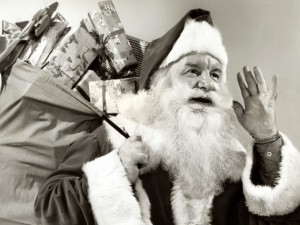 awaiting delivery.  They now occupied every available space in the kitchen and dining room.  My feet were sore.  My back was sore and I was too tired to make a fire.

“I’m done.” My wife unplugged the tree, kissed me goodnight and headed up the stairs.

“I’ll be up in a minute.”  I poured myself a second glass of wine and eased my backside into my corner of the couch. I couldn’t remember ever being so tired.

The tap at the window should have frightened me, but I was too exhausted for much of a response.  I thought it was probably one of the neighbors telling me that I’d left open the garage. With a groan, I got up to open the door.

It wasn’t a neighbor.  It was an older man, wearing a red, fur-trimmed suit, bifocals and a hat.  He sported a long, flowing white beard.  “Merry Christmas, Joe!”  He ushered himself inside, helped himself to a cookie and sat down in my corner of the couch.  “Sit! Sit!” he said, as if this were his house.

His eyes seemed to linger on the half-filled glass in my hand. I put a polite smile on my face. “Would you like some wine?”

I went back to the kitchen, poured him a glass, and topped off my own.  Returning to the family room, I fumbled through a half-hearted apology.  “I’m sorry I didn’t build a –”

I froze.  Three blazing logs filled the fireplace and the old man was warming his hands by it.

“Love your tree.”  Its lights flickered from across the room.

“Uh…thanks.”  I looked down at my glass of wine.  I had not had that much to drink.  I was getting nervous.  “How did you know my name?”

“Oh, I know everything about you.”

“Are you from the government?  Google?  Uber?”

“You know better than that.” His eyes hinted at his red suit.

The polite smile froze on my face.  He is delusional, I was thinking.  My wife will kill me for letting him into the house.  Perhaps if I humor him, he will leave.  He thinks he’s Santa.  He won’t stay long.  Who knows?  Maybe he’ll even leave a gift.

“So, how are things at the North Pole?” I ventured.

“A little warmer than usual.”

“Sunning in the Bahamas.  She hates this time of year.”

“Of course, all that packing and shipping.  Speaking of which, aren’t you a little early?  There are still ten days before Christmas.  Are you still trying to find out who is naughty and nice?”

“Please.  This is Washington.  I was finished here months ago.”

“Giving out a lot of coal then, are you?  At least the Pennsylvania delegation will be happy.

“Will it be clean coal?”

“It’s Washington-speak.”  I smiled and poured myself another glass of wine.  I was warming to this guy.  “What are the politicians asking for this year?”

“Other than mega-donors?  Well, let’s see.  I already gave Rick Perry a new pair of glasses.  And, Rand Paul always asks for the same thing.

The old elf nodded.  “Hillary wishes I could make Benghazi go away while Chris Christie is hoping for something other than a bridge to get him back in the headlines.  Elizabeth Warren wants a primary, Santorum new a cardigan; Jeb Bush wants an anointment and Obama wants to secure his legacy.”

The thought of another presidential election depressed me.

“I should be on my way, then.  Just one thing: what would you like for Christmas?”

The old man frowned. “Surely, there is something?”

“No.  My wife and the kids are healthy and happy.  We have a roof over our heads and more comforts than we deserve. Did I mention I have a new granddaughter?

The Santa-guy took off his glasses and pulled out a handkerchief to clean them.  “You are forgetting who I am.  And, that I know you.  There is something you want.  You just need to say it.”

Still, he waited.  Thinking he might stay the night, I tried to articulate a Christmas wish.  I started slowly, but with each passing word, I picked up steam.

“I want our leaders to care more about our future than they do about their jobs.  I want them to govern and take responsibility for what they do and don’t do. I want them to listen to each other rather than to news programs that only echo what they already believe.  I want them to solve problems rather than perpetuate them to fan the fuel of their political outrage. I want them to remember that we are one people, and that our survival depends on trusting the better angels of our nature.”

“I want to be proud of America, again. I want us to be the good guys, again – a country that leads by example rather than by brute force; a country that is exceptional for its ideals as well as for its position in the world.”

The old man grunted. “You’re right.  That is naïve.”

“Why can’t we all just get along?”

“You’d better go.” I laughed and shook my head.  “I’m more than done for the night.”  I walked him towards the door, reminding myself to lock it behind him.  The old man turned back to me as he crossed the threshold.  He had a far-away look to his eye.

“You know, you’re not alone. Have a little faith in your fellow man. It’s not by accident that we say ‘Peace on earth. Good will towards men’ this time of year.”

“I know, Santa.  Have a merry Christmas.”

“Merry Christmas.”  And with a wave of his hand, he disappeared into the night.  Now all I have to do is figure out how to put out that damn fire he started.