I have a typewriter.  It’s sits on a bookshelf in my office next to a few of my favorite collected first editions.  An old metal collapsible Corona, it’s a Spartan-looking machine with two tin spools that stretch an ink-laden ribbon across the face of its carriage. Individual metal keys labeled with the letters of the alphabet stand out from its frame.  When pressed (more like punched), they lift a thin metal arm with the appropriate typeface out of the belly of the beast.  The typeface strikes the ink ribbon to stamp its image onto a sheet of paper rolled around the rubber carriage. It still functions (“works” being too strong a word). 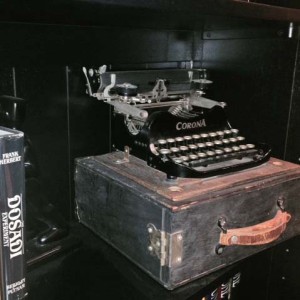 My mother gave it to me. The daughter of Polish and German parents, (which is a story all by itself) she grew up in Hamburg, a small town outside of Buffalo, New York.  A bright, confident, athletic young woman, she was passionate about music and so impressed her piano teacher that the woman gave her an upright Krakauer piano to further her musical talent.

No one was surprised a few years later when Mom applied, and gained admission, to the State Teacher’s College in Cortland, New York.  The year was 1946. She was the first in her family ever to attend college.

Although tuition at the state school was free, her parents could not afford the cost of her room and board, her books and school supplies. If it were not for the last-minute financial intervention of her Uncle Clarence, she never would have gone to college.

She arrived in Cortland, found a room (and a roommate), got a job selling candy at the Treat Shop, registered, and attended class.  There, she discovered another hurdle.  Her professors recommended that all papers be typewritten.

Given how expensive typewriters were back then, this was out of the question.  She survived her first year, scratching out each paper in longhand.  (And since her handwriting looks like mine, this could not have been easy on her professors).

She returned home that summer determined to find a way to buy a typewriter.  She conferred with her parents and they, being used to such life choices, offered up a solution.

She could sell the Karkauer.

“But I love that piano.”

“It’s the only way you can afford to buy a typewriter.”

Although it broke my mothers heart, she sold the upright.  Her father found a portable typewriter made at the Corona factory up in Syracuse.  With all that metal, it was a heavy contraption, so my grandfather made a box for it out of wood with a leather strap on top to make it easier to carry.

The typewriter was a fixture in our house for many years.  My mom used it to get her masters and to type my father’s grad school papers when he got home from Korea.  (They always had a running debate about who actually wrote those papers).  My mom became a New York State teacher and ultimately a college professor.  A pioneer in health and sex education (also another story) she was way ahead of her time.  Along the way, she upgraded typewriters and the ancient portable Corona was banished to the attic.

Decades later, when she and my father downsized to a smaller home, I got the typewriter.  Although it is useless in its ability to further my writing career, I keep it nearby to remind me that success usually costs more than we can afford and requires much more sacrifice than we intend.