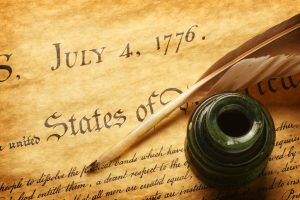 If you are looking for someone to blame for the divisiveness, acrimony, and civil unrest in today’s politics, blame Jefferson.

Had the founding father not written his immortal words in the Declaration of Independence, we wouldn’t find ourselves in the mess we’re in today.

“We hold these truths to be self-evident, that all men are created equal, that they are endowed by their Creator with certain unalienable Rights, that among these are Life, Liberty, and the pursuit of Happiness.”

In its historical context, it’s a breathtaking statement. Throughout most of history equality didn’t exist; the rich and powerful ruled and everyone else served. And, courtesy of the Catholic Church, they claimed a divine right to do so for well over a thousand years. No one considered those words let alone spoke them aloud, especially not to a king.

Philosopher John Locke had penned the phrase “life, liberty, and property,” but the pursuit of happiness? That was Jefferson lifting his middle finger to the power of any state to define the dreams of citizens.

But the pursuit of happiness? That was Jefferson lifting his middle finger to the power of any state to define the dreams of citizens.

His declaration became a clarion call for the oppressed everywhere and inspired revolutions that toppled monarchies across the globe. Throughout history people have thronged to our shores because of the promise embedded in those words.

The operative word in that sentence is “promise.” The founders knew the concept of equality was aspirational and eighty-nine years later, Lincoln affirmed it when called us “…a new nation, conceived in liberty and dedicated to the proposition that all men are created equal.”

Nearly two hundred and fifty years of experience shows that we have yet to live up to that dedication. Our history is stained with slavery, segregation, racism, sexism, and religious tyranny. They all have coexisted with our grand experiment.

At the same time, Jefferson’s words continuously call us to higher ground. It took a civil war to emancipate African Americans — and our nation — from slavery. It took one hundred and forty-four years to grant women the right to vote. Both demonstrated what Lincoln called “the better angels of our nature,” but also showed how agonizingly slow our progress towards equality actually was.

In the last sixty years, however, the American experiment has begun to bear fruit.

We ended state-sponsored segregation; we allowed the races to intermarry; we gave women control over their own bodies, their own finances and allowed them to pursue careers like their male counterparts; We championed the rights of the LGBTQ communities to pursue happiness just like the rest of us. We’ve begun to take measures (albeit slowly) to provide the diversity of our population with an equal opportunity to obtain justice, engage in society, and compete in our economy.

It’s a lot for such a short period of time, and we’re feeling the growing pains of continuous change. We struggle with how far our laws should go, and where the boundaries now are for our collective social mores. The MeToo movement led us to reexamine what are acceptable behaviors between men and women and we’re learning new language to account for sexual identity and preference. Like the argument over Miss, Mrs. and Ms., we’re debating whether or not “they” might be an option for “he and she.”

The murder of George Floyd has forced us to address the racial injustice embedded in our judicial system (albeit slowly) and we’ve begun to scour our business practices, institutions, and social media algorithms to weed out bias in their application.

There’s no guidebook for such rapid social change. And, of course, there is resistance. You can’t change the way the world has worked for two hundred and fifty years and expect everyone to be pleased. People have begun to tire of “wokeness,” being politically correct, and dealing with pronouns.

Behind this exhaustion over continuous change, however, is a more organized effort at resistance. The recent rise of nationalism (both white and Christian) is fueled by their fear of losing their traditional role in dictating the terms of equality and what constitutes the pursuit of happiness. The white nationalist “replacement theory” is a fear-based screed about the loss of power due to the growth of minority and immigrant populations. Christianity’s fifty-year campaign to rescind women’s rights over their own bodies is also a case in point. And if you read Justice Clarence Thomas’s opinion, you know they are not finished.

As a nation we will hash this out at the ballot box for years to come. But ultimately, I believe the better angels of our nature will prevail. Jefferson’s words don’t allow for compromise. We either are created equal or we’re not. We either have those inalienable rights or we do not. The words force us to continually examine the norms by which we live to see if we practice what we, and our nation, preach. We can’t afford to back away from them. They are what makes America great. They always have been. 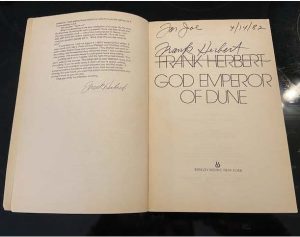 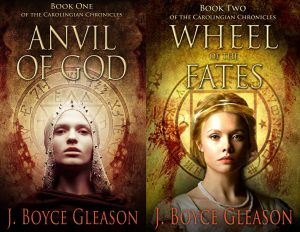 First review is in! Kirkus Reviews called Wheel of the Fates “Entertaining historical fiction, overstuffed with bloodshed, drama and desire.” Click this to get your copy at: https://amzn.to/2RnWwMa 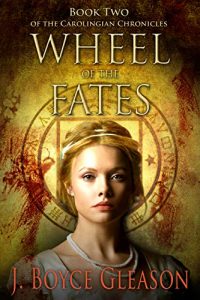 At the last Historical Novel Society Annual meeting I participated in a “two-page read” where authors submit the first two pages of their new novels to be read aloud and critiqued by agents and publishers.  Here is my submission from Wheel of the Fates, Book Two of the Carolingian Chronicles

Pippin stood at the rampart, broadsword across his back, scowling at the sun as it fell toward the horizon.  Although not a tall man, he was an imposing figure with the shoulders of a blacksmith and the casual grace of a swordsman. Those passing gave him a wide berth; some even chose a different path. The people of Laon had had enough of warriors. And from the looks Pippin received, they blamed him as much as Carloman for their plight.

Although Pippin’s brother had never taken the city, he had breached its wall and killed nearly a third of those defending it to arrest their half-brother, Gripho.  The hectare-sized burial mound on the south plain was a stark testament to the cost of the siege.

Inside the city walls the costs were no less evident.  Scores of newly widowed women filled the main plaza, selling their household goods in a vain attempt to sustain what was left of their families.  From the din of their pleading, their need was palpable.

He should have left weeks earlier, but had refused to go without Bertrada.  She had broken their courtship over the siege, stating she wanted nothing further to do with the brutality of his family. She had hidden in her father’s house and refused all Pippin’s entreaties.  And while Pippin had made it clear that he would not leave without her, he was running out of time.  His knights were assembling for the spring campaign. He would have to leave for Paris in the morning.

The standoff was taking a heavy toll on him. He had taken to drink and could not remember the last time he had slept through the night or eaten a decent meal.

But, tonight would change everything, Pippin promised himself. He even had bathed and put on fresh clothes.  When he looked down over the wall at the burial mound below, however, his confidence faltered.  “Why did you have to hang that boy, Carloman?”

Something caught the corner of his eye, triggering his senses to high alert. His eyes searched the entryways on the street and checked the windows, the rooftops and alleyways. Keeping his stride casual, he changed vantage points and searched again, but failed to identify the source of the movement.

His nostrils flared and his skin prickled in the cold wind.  His hand moved to the dagger at his belt.  Where was the threat?  His sense of jeopardy stabbed at him like sunlight off an enemy’s shield.

You’re stalling, he scolded himself.  The day was ending; it was time. With a grim determination he began his trek up the main road while a familiar litany gnawed at the corners of his mind. He tried to ignore it, tried to keep it buried and hidden from sight, but it rose, nonetheless, to assert itself – what if I am not worthy?

As he ascended the street, his pace began to slow.  And then, he stopped moving altogether.  He had known knights in battle like this, too wounded to continue fighting yet too proud to retreat. They turned to face their opponents as if the sheer force of their will could sustain them.  It never did.

He turned into the forecourt of Bertrada’s villa and whispered a short prayer that this night would be different.

I’m excited to announce that Launch Date for Wheel of the Fates, Book Two of the Carolingian Chronicles is April 20th!  Pre-orders and soft cover copies now available on Amazon.com: