I blame my buddy Steve Pagnotta.  In high school he suggested that I read The Hobbit and The Lord of the Rings (in that order, of course).  His sales pitch fell apart when I asked him what they were about.  He said, “dwarves, wizards and dragons.”  I immediately stopped listening.  Although I had been a comic book fiend in my youth (DareDevil, Spiderman, Batman), the idea of reading about faerie people just didn’t seem my style.  Fortunately, Pags persisted and I promised to give Tolkien’s books a try. 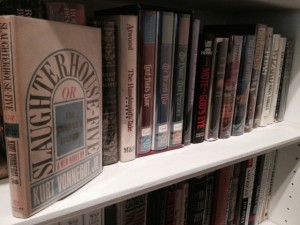 I devoured them over the course of a week.  They were so wonderfully different and amazingly complex.  The plots followed a familiar “imperiled hero on a quest” format; the action was intense, the writing engaging and the characters were filled with a mixture of comic relief and pathos.  What captured my attention, however, were the backstories of the elves and dwarves and wizards and hobbits who all had their own well-formed histories, legends and languages.  I felt like I was missing the best part of the story.

Thus began my infatuation with the world of science fiction/fantasy.  I know that sounds strange coming from a novelist who writes historical fiction, but the collection of books that occupies the most space on my shelves doesn’t lie.  Asimov, Herbert, Donaldson, Vonnegut, Bradley, Jordan, Zimmer-Bradley, McCaffrey, Le Guin, Weiss & Hickman, Gaimon, Sanderson, Card, Eddings, Martin, Baer, Gibson…and those are just a few off the top of my head.

Now before you dismiss the genre (as many do), think about the number of classics that owe their allegiance to it: The Wonderful Wizard of Oz, Alice’s Adventures in Wonderland, Peter Pan in Kensington Gardens, or Twain’s A Connecticut Yankee in King Arthur’s Court, The Chronicles of Narnia. It is an old genre that has become engrained in our collective psyche.
But the series that did me in was Stephen R. Donaldson’s  “The Chronicles of Thomas Covenant the Unbeliever.”  My sister Jean gave me the three-box set for Christmas the year I graduated from college and I read them over the course of three days.  Although Donaldson had created a Tolkien-like world, his main character refused to believe in it, thinking he had gone mad.   It was an interesting twist that gave the entire series an undercurrent of angst that took the story to an ingenious new level.After being hooked by Tolkien, Vonnegut came next.  I bought Breakfast of Champions as a freshman in college and quickly backtracked to pick up a four volume paperback set of Slaughter House Five, Titans of Venus, God Bless You Mrs. Rosewater, and Player Piano.  To this day I remember reading the opening line of Slaughter House Five “Listen, Billy Pilgrim has become unstuck in time.”

After that I was off to the races.  I devoured just about everything I could find.  Dune, Foundation, I Robot, Stranger in a Strange Land, The Mists of Avalon, The Martian Chronicles, The Left Hand of Darkness, The Forever War, The Belgariad, The Mote in God’s Eye, DrangonLance Chronicles, Red Planet, The Wheel of Time (all fourteen books), Necromancer, Mona Lisa Overdrive.  I shifted from fantasy to science fiction (where an extension of known science drives the story) and back again.

I do read other genres.  Before science fiction/fantasy, I first was hooked on historical fiction.  I’ve read everything by James Clavell, most of Bernard Cornwell and Leon Uris and was delighted when Ken Follett switched from mysteries to pen Pillars of the Earth.   I do love a good mystery (I plowed through most of A. Cannon Doyle’s Sherlock Holmes books as a high schooler).  Same with spy novels; I’ve read most of Jean Le Carré and was a fan of Jason Bourne long before Matt Damon played him in a movie.

Most of all, I love good writing.  For that, I revere John Irving and Pat Conroy, two of America’s greatest living authors.  They write like a dream.

So if you see my name on Goodreads or Facebook, please don’t be surprised if I review a book or five from a genre other than my own, especially if it is science fiction.  It’s just what I find on my bookshelf.

I blame it on Pags.