To appreciate my fascination with the past, you have to understand how I was introduced to it.  It started with my older brother Jimmy in the fall of 1973.

“I can’t take that class.  I’m a freshman.  I’m supposed to take History 5 with Shewmaker.”

“Adams is going to retire this year.  And he’s only teaching two more classes.  One this fall; the other this winter. You should take both of them.”

“It would be better than not taking them.”

So, I signed up for “History of the World Since 1919,” bought the single assigned textbook (of the same name) and trudged to Reed Hall to take a seat among the fifty-or-so upper classmen who deserved to be in the room.  I arrived early, which was lucky, as more than 100 people were crowding into the auditorium.  I remember thinking that maybe I had misread the course guide.

I had been fortunate to have good history teachers in high school: Doc. Farrell, Doc. Pruitt, and Ms. Koob.  Each employed a different approach to studying the past, but all were inquisitive, engaging and most of all entertaining.  Now that I was in college, I wondered how they would compare. 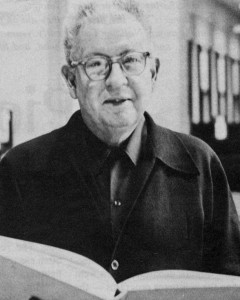 The room grew quiet as the first of Baker’s bells signaled the start of class. I heard the door open at the back of the room and turned to find an elderly man shuffling down the aisle with a tripod cane.  His hair was white and stood straight up from his head in what, at the time, was called a “crew cut” (a worrisome sign in 1973).  He wore a grey suit, with a black shirt tied to the top button.  What drew my attention, however, were the largest and blackest pair of sunglasses I had ever seen.  They wrapped around his face so that light was blocked on all sides.  (I would learn later that these were designed for cataract patients).

My brother is hazing me, I thought.  There was no way I could relate to this ancient relic.  Adams slowly made his way to the front of the class and sat down at a small desk.  He’s sitting down! I screamed in my head. He’s going to teach the class from a chair.  I wanted to strangle Jimmy.  I wondered whether or not I still could transfer out of the class, and readied myself for an hour and ten-minute snooze.

Once seated, Adams pulled out a stack of yellowed 3 X 5 index cards and placed them carefully on the desk.  Next came a huge magnifying glass, the rectangle kind my grandmother used for reading the paper.  He’s going to read them to us?  I groaned aloud.

Adams lifted the first index card off his carefully arranged stack, drew it before his huge magnifying glass and, lifted his head.  I had the distinct impression he wasn’t looking at the card.

And then, he opened his mouth to speak.

He had a voice that made James Earl Jones sound like Mickey Mouse.  It boomed across the room with such resonance and authority that it swept all of us into its embrace and transported us across time and space until we found ourselves in the Hall of Mirrors at the Palace of Versailles just outside Paris in 1919.  We watched a pale and nervous Herman Müller, the German Foreign Minister, blink into the blinding light of the mirrored hall before picking up the pen to sign what was called by his countrymen back home, the “Diktat.”  The treaty acknowledged German “guilt” for World War I and promised “reparations” for the damages inflicted on the allied nations during the war. The terms “guilt” and “reparations” took on an ominous tone coming from Adams’s mouth, as if they foreshadowed the dawning of the Apocalypse.  I would learn weeks later how much they did.

J. C. Adams taught history at Dartmouth College for 34 years. A 1970 Esquire cover story named him one the 10 best college professors in the country.  An expert in Balkan and Russian history, Adams was a graduate of the University of Pennsylvania and received his M.A. & Ph.D. in modern European diplomatic history from Duke. He spent a year in 1937 doing post-doctoral work in pre-war Europe and served with U.S. Army military intelligence during WWII.  He received the Bronze Star and one battle star before being discharged as a major in 1945.

“John made history come alive,” eulogized fellow history professor Charles T. Wood, when Adams died in 1986, “and his courses were always filled.”  Revered by his students, Adams also was renowned for his tough grades.   So tough that, Woods said, “His was a course that the seniors took in the spring after they had been admitted into law school.” (Italics added).

Exactly and hour and ten minutes after he had begun, the Baker bells began to chime again and Adams put down his last index card.  I, and my 100-plus classmates returned from our trip into the past to our classroom in Reed Hall, in Hanover, New Hampshire during the fall of 1973.

“Until Wednesday,” Adams’s voice promised.  I couldn’t wait.  Next: The Gathering Storm.